How to Boost Confidence Through Affirmations

How to Boost Confidence Through Affirmations

One way to become more confident is to change your thinking. To change your thinking, you first have to become aware of your thinking. Awareness is the first step to a more effective competitive mindset. The simplest way to raise awareness is to keep a journal. Each day after practice and after competitions, record your thoughts about your performance and how your thinking influenced the execution of your shots. If you recognize that you were feeling doubtful or scared or overly nervous, make note of it. Become aware when you sabotage your own performance because you doubted your abilities to perform the shot or you were afraid of failing or looking stupid in the eyes of others. Notice any negative thoughts that run through your head before, during or after performing a shot. Take note of particular thoughts like “I hope I can do this”, “I can’t putt”, ”Great!, I’m in another bunker and I won’t be able to get out”, “What if I mess up?”, “I can’t close out rounds” and on and on. Once you are aware of these sabotaging thoughts, you can begin to take control of them and switch them around. 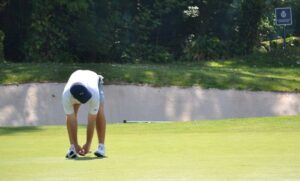 You can use some of the common doubts you have above, and reframe them into positive affirmations to boost your confidence. Here are some examples, “I can do this”, “I will make the next putt”, “I will commit to my next bunker shot”, “I have played these last few holes well before, so I will again”, “I have trained hard so I can trust my processes and skills”. 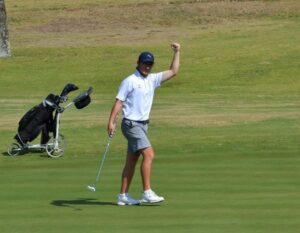 There are several things you can do to fight the inner doubter. The things we think and say are the starting point of boosting or sabotaging confidence. It is hard to just ignore negative thoughts. You need something to replace them instead to build your confidence. Affirmations are simply positive statements about your abilities that are true or that you reasonably want to be true. Start by forming 6-10 good affirmative statements. All statements should be stated in the positive and stated as fact not as wish or want or hope. As you start repeating and committing to these affirmations, you begin laying the bricks to build your confidence up one phrase at a time.