The Goal of Putting

The Goal of Putting

‘Golf is 90% mental’. This is a phrase many players are familiar with and is especially true for putting. We become more stressed and anxious as we get closer to the hole and the outcome of the putt is at the fore front of our minds. Naturally, this obsession with outcome and resulting stress leads to poor execution and missed putts. To resolve this, we need to first address what the goal of a putt is, before reading further, think about what your goal for a 6-foot putt is.

If your answer is “to make it”, you are likely a poor putter. This is an outcome based approach which leads to a focus on pulling or pushing it, stroke mechanics, anxiety, tension and a yip like stroke, because we try control the putter through impact in an attempt to control the outcome of the putt. 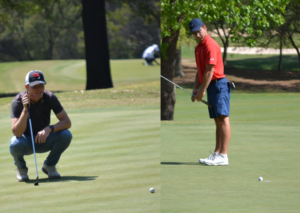 The goal of putting is to judge the right line and right pace, then roll the ball as best as possible, the slopes and gravity will do the rest for you. Green reading is the most essential part of putting, an incorrect line and pace gives you almost zero chance of making a putt. Having the right line and correctly judging the pace puts the odds of making the putt hugely in your favour, shifting your focus from there to rolling the ball as best as you can is as much influence as you can possibly have on the outcome of the putt. Focusing only your processes of reading the putt and rolling it at the pace you want to will greatly reduce stress, anxiety and tension which leads to a better executed stroke and ultimately more chance of holing the putt. 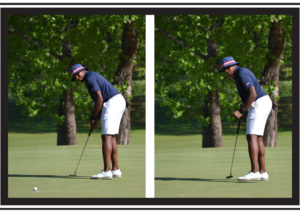 It is a difficult concept to implement because obviously we want to hole-the-putt, but this is an important distinction to make, the less you fixate on making the putt and accept you can’t control the ball going in the hole the more calm you will be and enjoy the process of putting.